Get real time updates directly on you device, subscribe now.

(CNN)Iran admitted Saturday that it mistakenly shot down a Ukrainian passenger jet, blaming human error and “US adventurism” for the crash that left 176 people dead.

In a statement, the nation’s armed forces said it targeted the passenger plane unintentionally. It attributed the crash to radar activity and fear of US action.
“The Islamic Republic of Iran deeply regrets this disastrous mistake. My thoughts and prayers go to all the mourning families,” Iranian President Hassan Rouhani said.
Ukrainian Airlines Flight 752 crashed Wednesday after takeoff from Tehran’s airport. The crash came hours after Iran fired missiles at Iraqi military bases housing US troops in retaliation for a drone strike at Baghdad airport that killed Iranian commander Qasem Soleimani.
After the missile operation in Iraq, US military flights around Iranian borders increased and Iranian military officials reported seeing aerial targets coming toward strategic centers, according to a statement by Iranian armed forces headquarters.
“The aircraft came close to a sensitive IRGC military center at an altitude and flight condition that resembled hostile targeting. Under these circumstances, the aircraft was unintentionally hit, which unfortunately resulted in death of the many Iranian and foreign nationals,” the statement reads.
The victims include 82 Iranians, 63 Canadians, 11 Ukrainians, 10 Swedes, four Afghans, three Germans and three British nationals.
“Human error at time of crisis caused by US adventurism led to disaster,” Iranian Foreign Minister Javad Zarif tweeted. 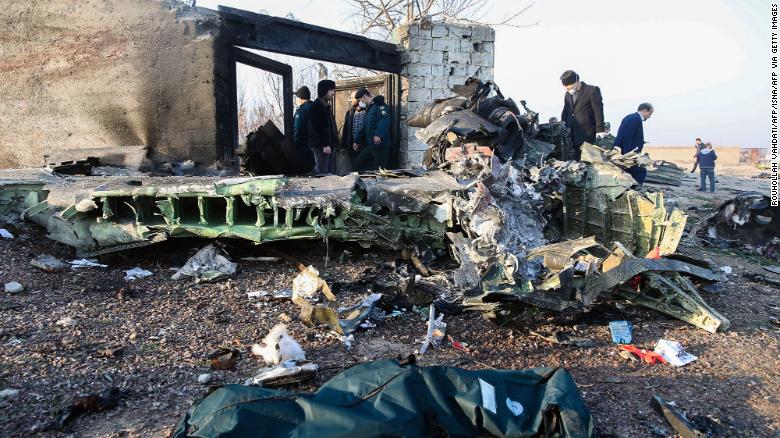 People stand near the wreckage after a Ukrainian plane carrying 176 passengers crashed near Imam Khomeini airport.
The commander of Iran’s Islamic Revolutionary Guard Corps Aerospace Force said he had requested all commercial flights in Iran be grounded until tensions cooled off.
But the Armed Forces and government and aviation authorities chose not to do so, Brigadier-General Amir-Ali Hajizadeh said at a news conference Saturday.
Hajizadeh said the plane was misidentified as a cruise missile by an air defense operator.
The operator was unable to contact the central air defense command to confirm it. He had 10 seconds to choose between shooting it down or not, Hajizadeh said.
Hajizadeh accepted responsibility, saying that once it became clear what had happened, he thought: “I wish I was dead.”

Those responsible will be prosecuted

The Ukrainian General Prosecutor’s office said in a statement Saturday it was now investigating the incident as a possible case of “willful killing and aircraft destruction.”
The downing of the plane was being handled as a case of “violation of traffic safety rules” and “operation of air transport resulting in death” but prosecutors said Iran’s admission changed the scope to “liability for the willful killing of two or more people and the destruction of the aircraft,” the statement said.
Ukrainian President Volodymyr Zelensky called Iran’s admission a “step n the right direction” via Twitter on Saturday.
“I insist on immediately completing identification of the bodies and their return to Ukraine,” Zelensky wrote after a call with Rouhani.
“The perpetrators must be held accountable. We look forward to further legal and technical cooperation,” added Zelensky, who had earlier made a call for Iran to pay compensation.
Rouhani said in a statement released by his office Saturday that those responsible for taking down the plane will be prosecuted.
“Further investigation is needed to identify all the causes and roots of this tragedy and prosecute the perpetrators of this unforgivable mistake and inform the honorable people of Iran and the families of the victims about it,” Rouhani said.
“It is also necessary to adopt the required arrangements and measures to address the weaknesses of the country’s defense systems to make sure such a disaster is never repeated,” he added.

Iran had previously denied US claims that the country had struck down the plane accidentally.
A US official familiar with the intelligence said the aircraft was downed by two Russian-made SA-15 surface-to-air missiles. The US saw Iranian radar signals lock onto the jetliner before it was shot down.
“No one will assume responsibility for such a big lie once it is known that the claim had been fraudulent,” government spokesman Ali Rabiei said in a statement earlier Friday, according to state-run Press TV.
Iranian authorities are in possession of the two flight data recorders, also known as black boxes, which Ukrainian investigators got access to Friday. They have yet to start examining the information, but have said it included communications between the pilot and Tehran flight control. 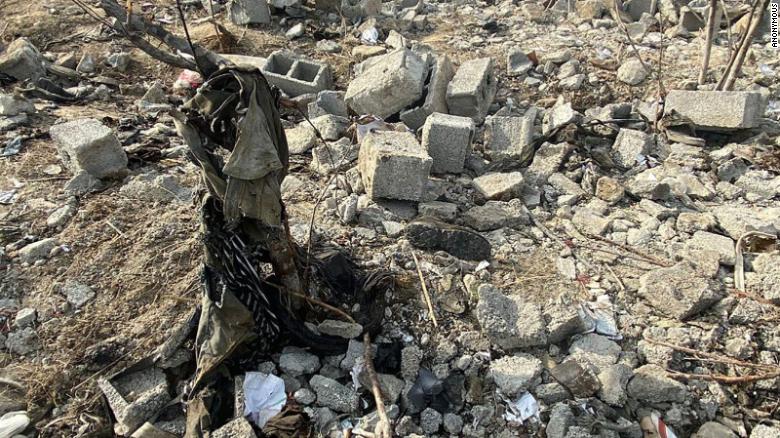 The Canadian government was waiting for Iran to issue 10 visas to give its representatives access to the accident site, Foreign Minister Francois-Philippe Champagne said late Friday.
Two members of Canada’s Transportation Safety Board and 10 Global Affairs officials were waiting in Ankara, Turkey for the documents.

Tensions between the US and Iran escalated last week after US President Donald Trump ordered a precision strike that killed Iranian commander Qasem Soleimani.
Soleimani was plotting “imminent and sinister attacks” on Americans, Trump said, adding that the action was taken to stop a war.
The Pentagon blamed Soleimani and his Quds Force for attacks on coalition bases in Iraq in recent months, including the December 27 strike that killed an American contractor and Iraqi personnel. He was also blamed for the US Embassy attack in Baghdad on December 31. The Pentagon said in addition to the hundreds killed in his time as a commander, thousands more were wounded.
Tensions between the US and Iran have complicated the investigation. US government investigators, for example, cannot fly into Tehran and meet with government officials without a license. That prohibition is due to longstanding sanctions rather than the most recent events, according to two US officials who spoke on the condition of anonymity.
Treasury Secretary Steven Mnuchin announced Friday that Trump was authorizing yet more sanctions on Iran.

Iran’s attack: Is there more to come?

Sampson R. Ampiaw is a Christian with evangelistic ministry and Web Developer in Ghana. He writes on evangelistic and discipleship topic and co-edit Pentbooks Magazine.

His greatest desire is to see the power of God's Salvation at work in all his audience.

Iran’s attack: Is there more to come?

History of The Church of Pentecost

This website uses cookies to improve your experience. We'll assume you're ok with this, but you can opt-out if you wish. AcceptRead More